Earlier this year, Japan went on one of the greatest runs we’ve seen out of any country in a long time. After basing nicely, we broke out violently exceeding even some of the most bullish expectations, including mine. By May of this year, Japan was up 75% in just 6 months. These stats are according to $DXJ, but regardless of which metric you’re using, the move was epic.

But on March 22nd, this all changed. The correction was underway. But the way I see it, 20+% correction or not, I think it’s handled it rather well. In fact, we might be towards to tail end of this consolidation and getting ready for another leg higher. This is a chart of the Wisdomtree Japan Hedged Equity Fund ($DXJ). Look at the massive 4-month Triangle and this attempt to break out of it: 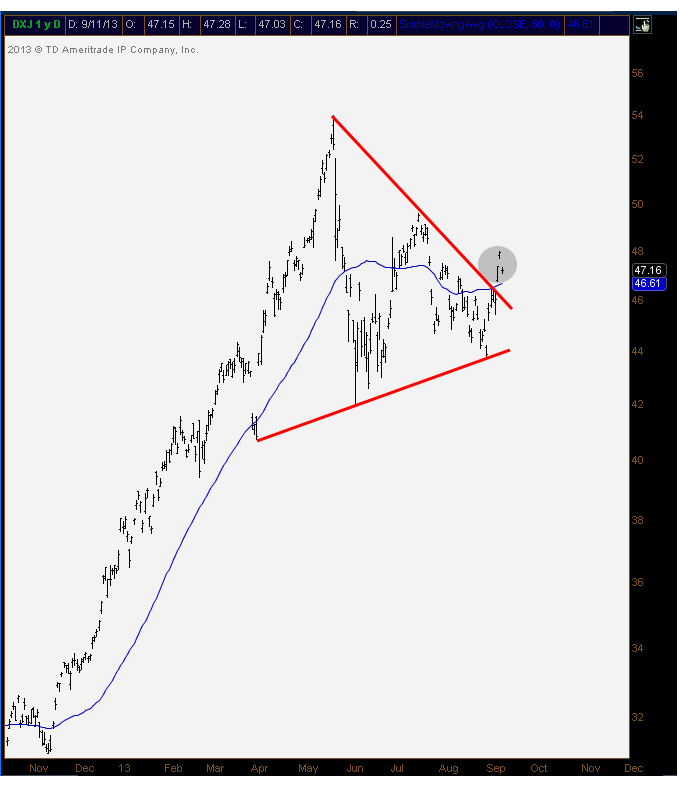 Not only are we now above the upper downtrend line, but also above a rising 50 day moving average. I think for now, if you’re in this name, that’s your out. As long as we’re above that level, I think we’re fine.

Measured move-wise, we want to look at the size of the base. The 12 points from 54 down to 42 represents the base of the consolidation. So we’d take that 12 points and add it to the 46.50ish breakout. This gives us a target somewhere around 58-59 and new 52-week highs in $DXJ. If I we’re long at that point, I’d be taking profits at the May highs. That’s enough for me before waiting for a new setup and risk/reward scenario. But the measured move makes sense; that target takes us back to the 2007 all-time highs. So it would not be that surprising if we get all the way back up there.

And these targets are great and everything. But the risk management here is the most important thing. If this breakout can’t hold, it would call into question everything mentioned above. From false moves come fast ones in the opposite direction right? So we need to stay disciplined.