The Head and Shoulders experts are popping up everywhere these days. Never has there been a price pattern searched for or imagined in people’s minds more than the infamous Head & Shoulders Pattern. Funny, as much as they love to talk about it and as much airtime as it gets on the TV and Internets, it’s actually one of the more rare patterns driven by supply and demand. The reason it is so rare is because, by definition, it is a reversal pattern. Since markets trend, and ongoing trends tend to continue trending in their direction, by looking for a Head and Shoulders Pattern, you are doing the exact opposite of what we’re trying to do here in the first place: recognize trends.

As a simple definition, a Head and Shoulders pattern, in this case, a Head and Shoulders Top, is made up of two higher highs (the “Left Shoulder” and the “Head”), followed by a lower high (“Right Shoulder”). After each of the prior higher highs, the ensuing sell-offs should find support near a similar point. This is what is called the “Neckline”. After the final lower lower high, the right shoulder if you will, prices sell off once again and ultimately break below that “Neckline”. This confirmation is the final piece of the puzzle to properly label it a, “Head and Shoulders Top”.

Currently, we are seeing such a pattern developing in the S&P500 Index. With a Left Shoulder in 2014, the Head throughout the Spring and Summer last year, and now a Right Shoulder in Q4, we have a Neckline near the 1860-1870 area. The S&P trading below that level, and only below that, would confirm that this is indeed, the rare structural topping pattern known as Head & Shoulders: 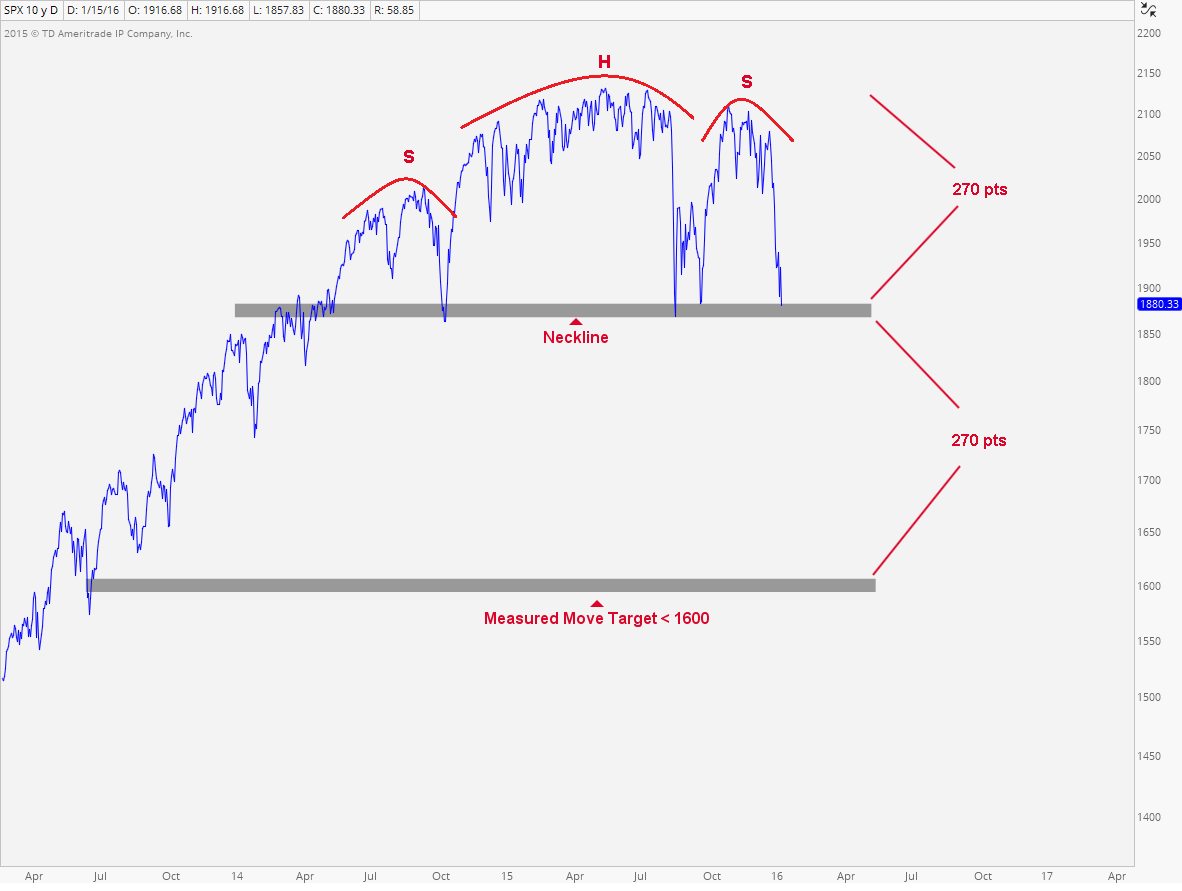 Here is the key: whether it is a head and shoulders pattern or not, is really the least important part of what we’re discussing here. Whatever stupid name you give these patterns is irrelevant. What we’re more concerned with are the implications of such a pattern being completed.

The measured move target based on a completion of a Head and Shoulders Top is the distance between the top of the Head and the Neckline, subtracted from the Neckline. Our math gives us about 1870 minus 270, which would take us down under 1600 in the S&P500. This has been a target of mine for months, so it’s nothing too exciting from our standpoint. It really just confirmation of everything we’re seeing elsewhere.

I still think this is a sell any strength market environment. Any breaks of a neckline this week, or next, would likely lead to another 14-15% of downside for this market. I don’t think it’s anything irregular and would really just be a nice correction after a monster rally in the market since 2009. Think about it: A 25% correction in prices after a 220% rally in 6 years? Seems pretty reasonable, if you ask me. I don’t see any sense is using words like Turmoil or Crisis, just so we can sell ads and drive page views. For market participants, who are only here to make money in the market, not scare their audience for personal gain, I think this would be perfectly normal.

We’ve been leaning on the short side for months now and would look to sell into strength, especially towards 1980, if we get up there. Also, I would definitely be aggressively adding to short positions if the S&P500 is below its Neckline. I think the levels are clean and this is a pretty simple setup.

No reason to over-complicate things right?