Crude Oil has been one of the most frustrating markets out there for the trend following community. For years, any attempted rallies have failed hard, but every sell-off has been bought up quickly. This has resulted in a massive sideways market and structurally just a mess.

The first chart shows the weekly candlesticks for Crude Oil going back to the 2008 decline. The initial thrust higher sent oil prices up over 240% from their 2009 lows. But since then, it’s been a sideways grind frustrating anyone looking for a sustainable trend. 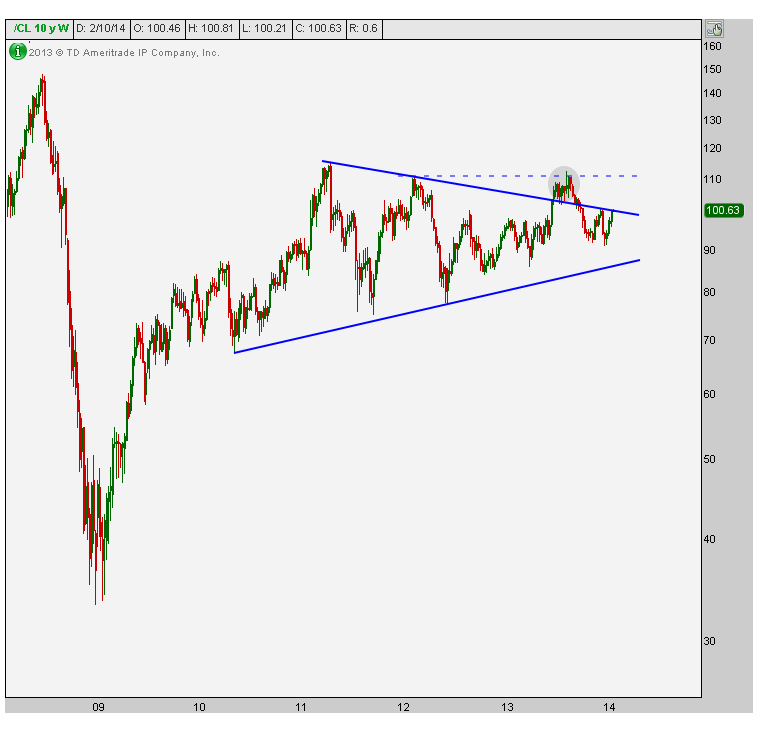 You can see that the lows in 2010 and highs in 2011 represent the base of this symmetrical triangle looking pattern. Last summer prices tried to breakout of the upper trendline but failed as it ran into the February 2012 highs.

Here is a closer look at what’s happening. This is a daily candlestick chart where I added a 50 and 200 day moving average. Prices are currently running into the 200 day, which also represents resistance from the December highs. Notice how the 50 day moving average has already turned around and started to rise. I find that the direction the moving average is trending in to be more important that anything else. 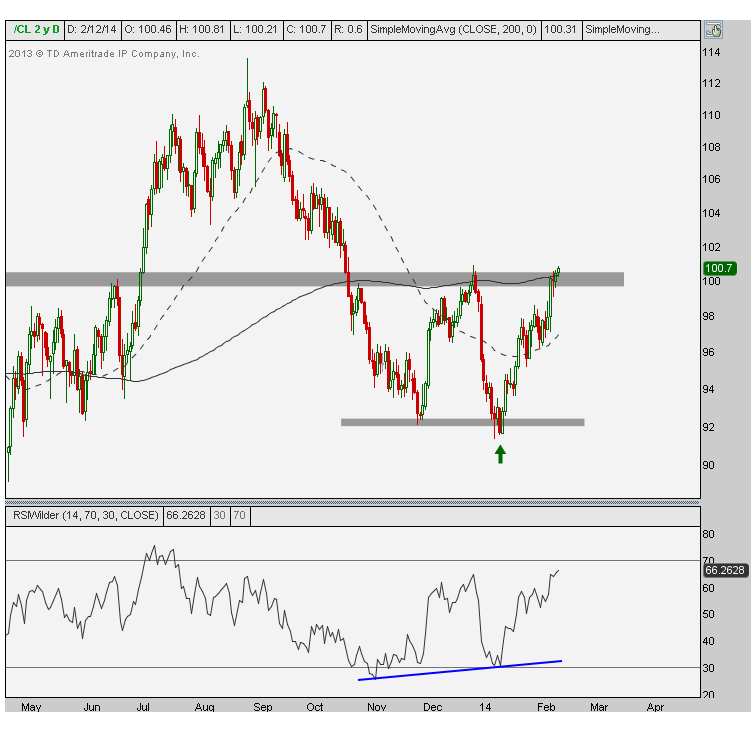 Also notice the bullish divergence in momentum at those mid-January lows. As prices fell below the thanksgiving lows in Oil, the Relative Strength Index was putting in a higher low. All of this was taking place as prices quickly recovered rallying back above those previous lows. That brief false breakdown was the catalyst to bring prices back up to resistance so quickly. I think this particular catalyst can take prices even higher. We want to see back to back closes up above these December highs as confirmation.

These charts above represent Crude Oil priced in US Dollars. If we break out of these resistance levels, we could potentially see another 10-12% upside. But if you look at the first chart representing the weekly candlesticks, we can see crude is still structurally in a sideways trend. Selling near former resistance levels is probably best for tactical positions.

Structurally, I would expect the eventual resolution out of this massive 3-year consolidation to be explosive. In all likelihood this will resolve itself to the upside as these sort of corrections tend to eventually commit to the direction of the underlying trend, which in this case is higher since 2009.

If you’re interested in receiving weekly technical updates on Crude Oil and other commodities, register here to receive more information.