Was it a valid topping formation, in which case we’d anticipate price to follow through to the downside?

Or, was it more likely a failed breakdown, in which case we’d expect to see a swift move higher?

Call it a failed breakdown. A Shakeout. Bull hook. Bear trap works too. However we label it doesn’t change the fact that KRE reclaiming those 2018 highs is a critically important development for global markets and the rotation we’re seeing into cyclicals.

And not only are we back above our risk level, but the move is also being supported by improving breadth beneath the surface.

The above chart leads in perfectly to our next topic. It’s not just banks and financials showing strength beneath the surface – we’re seeing it across cyclicals and value stocks in general… with the exception of Energy.

Not only have we seen improvements in price at the index level for these sectors but we’re also seeing internals ramp up and confirm this action. Here’s a look:

These cyclical sectors experienced a few months of weakness coming into July, but have repaired much of this damage in the time since. In fact, Large-Cap Financials and Industrials are trading just off fresh highs as we speak. And the internals within these groups are supporting their moves higher as the percentage of components making new short-term highs has started to climb again with these indicators all back at levels we haven’t seen since June.

Bears had every chance to knock these underperformers lower while breadth was in the gutter. They couldn’t do it. Now, with participation turning a corner the ball is back in the bulls court. And most importantly, this could be the fuel the broader market needs to kick off the next stage of the current bull cycle.

3. Will the Good Times Roll?

And if we are entering the next stage of this bull cycle, we have to imagine that the Dow Jones Travel & Leisure Index and the Leisure and Entertainment ETF $PEJ are participating to the upside. These industry groups are great barometers for the “reopening trade” as the mainstream media likes to call it. And all that really means is that these stocks are tied closely to the health of the consumer economy.

So what do bulls want to see from these charts? Simple. Some decisive resolutions higher, in the direction of the underlying trend would go a long way. Prices recently dug in and found support at their key prior highs. That’s a good first step. Now, bulls just need to see them resume upward to new all time highs.

On the other hand, if Travel, Leisure, and Entertainment stocks are rolling over below their former highs, that’s probably happening in an environment where cyclicals and the global growth trade are under pressure in general.

4. Time For Defense To Take The Field?

As more defensive areas like Staples and Utilities have perked up on an absolute basis, the more offensive, leadership sectors have began to struggle on a relative basis.

The lackluster performance from these sectors in relative terms can be seen in the ratios below – XLY/XLP, XLK/XLP, XLC/XLP: 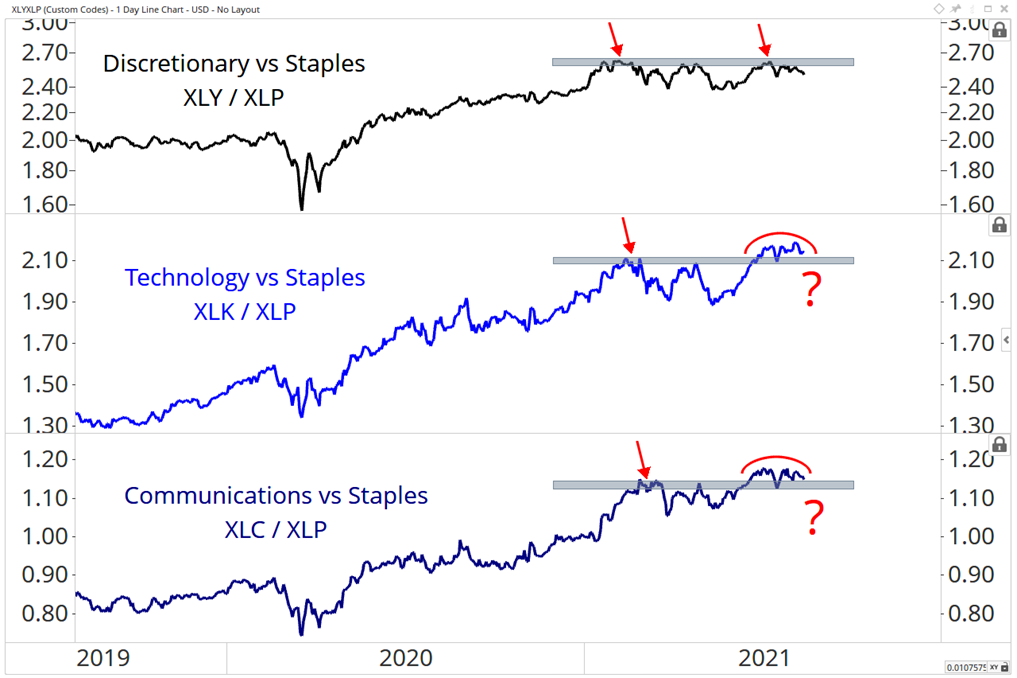 Discretionary relative to Staples continues to run into overhead supply, while Tech and Communications defend critical levels near their early 2021 highs vs Staples. Just to be clear, relative weakness from Staples is a common characteristic of healthy bull markets.

As such, if XLK/XLP and XLC/XLP lose their former highs, that’s a problem for the overall market, and it most likely means messy for longer.

On the flip side, upside resolutions in these relationships would be welcomed confirmation of the new highs for stocks and indicate a fresh leg higher could soon be underway.

Chinese stocks have been a disaster ever since the first quarter, with downside momentum really accelerating over the past few months. This is illustrated well by the chart of the MSCI China ETF $FXI. As such, we’ve been staying away and focusing on global leaders like Europe.

But, due to their size and weight in the global economy and many diversified stock market indexes, we can’t just ignore this worldwide behemoth.

The poor performance from China hasn’t just dragged on indexes like Emerging Markets whereby it makes up ~35% of the ETF – but even the All World Ex-US Index $VEU of which it comprises over 10% of the holdings.

Long story short, China is masking a lot of the progress we’re seeing from stock markets around the globe due to its massive weighting in so many international indexes.

For now, the weakness in China is isolated to China. This is illustrated well by contrasting the Emerging Markets Ex-China ETF $EMXC with the standard Emerging Markets ETF $EEM. The former is above our risk level at the 2018 highs, while the latter is below it. That’s the China index effect in a nutshell.

Until we see it flow over to other countries, we don’t want to overthink this. We just want to stay away.

Here’s a bonus chart highlighting the divergence between these two EM indexes in recent months: